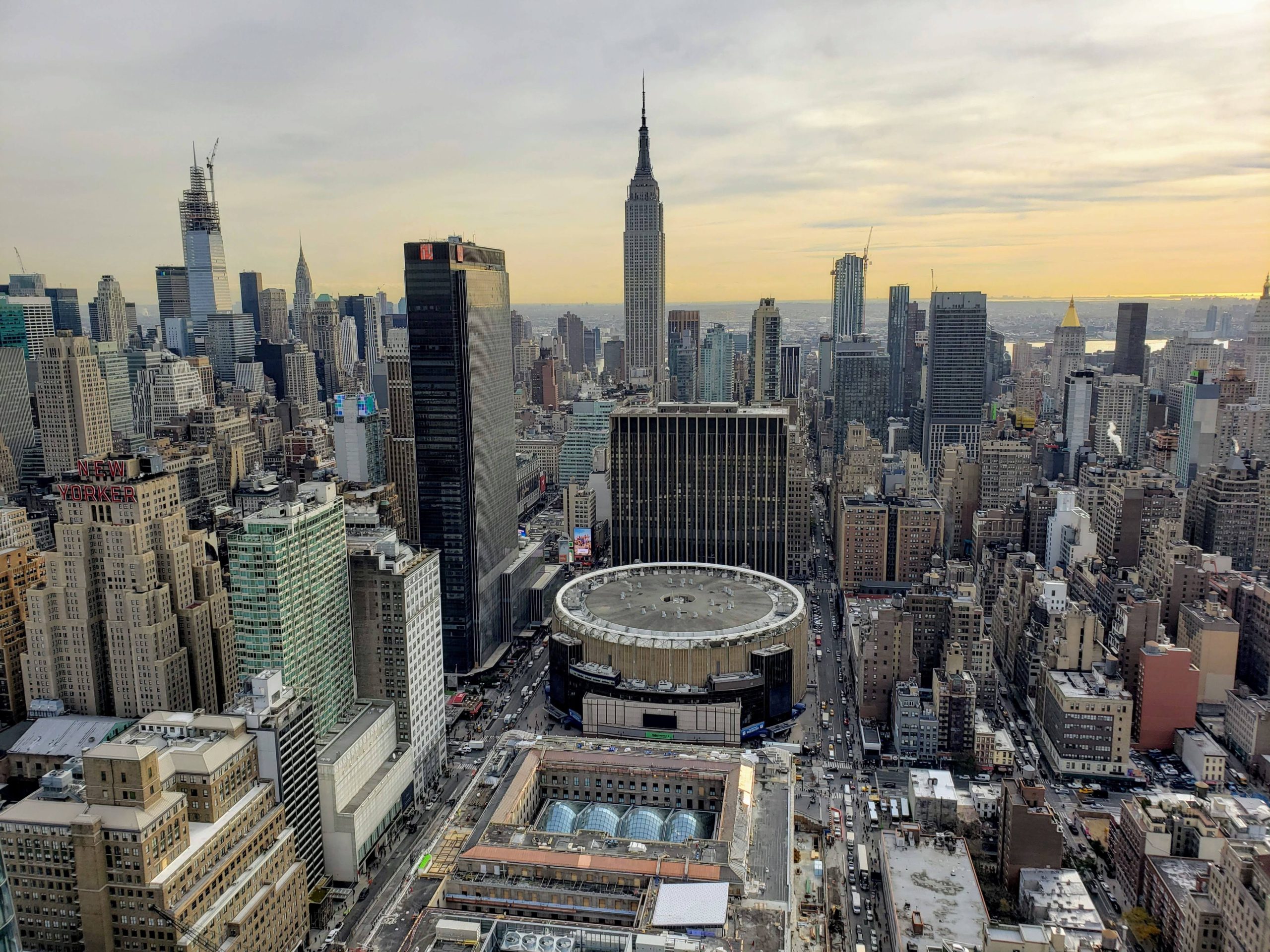 Manhattan in New York City arguably has the best, sky-high city views in America. The small island is chockfull of brilliant skyscrapers, stunning architecture and a street grid that makes the topography truly commanding from above. The skyline is iconic, and it’s best experienced from great heights. So what are the best NYC skyline views?

Naturally, being a local, I tend to avoid places that are a magnet to tourists, like Top of the Rock, Empire State Building and One World Trade Observatory. While they have impressive views, the problem with these observation decks is that they’re incredibly crowded, have extremely long wait times and, ultimately, we’ve seen these views before.

New York City’s skyline is constantly changing, and we should embrace new perspectives of the city. Views are still great from any which way, but if you’ve already visited the top three observatories, you’ll want a fresh new angle (*if you still want to visit one of the legacy observation decks, continue scrolling down since I highlight the main differences).

Having a birds-eye view of New York City is not only inspiring… it’s infectious. You feel like you’re on top of the world (well, being in NYC, you sort of are!). There’s so much history sprawling before you, and the composition from a visual perspective makes the aesthetic truly unique. Even living in NYC for 13 years, I jump at any chance to rise several hundred feet high to be mesmerized. Fortunately for me and 8 million locals, there are new places that are rising high and offering stunning views of the city.

Before I go into my list, I should note that The Edge is coming in March 2020. When this observation deck opens in Midtown West, it will be the highest outdoor observation deck in the Western Hemisphere, ultimately making the building one of the tallest buildings in the world.

Visitors will have views from 100 stories high at 1,776 feet (which is very close to the height of One World’s observation deck, which is floors 100 to 102).

Until then, here are the best new hot spots with the best NYC skyline views from high-rise buildings. These rooftops, observation decks and restaurant are completely new, offering different perspectives of the city and guaranteed to impress you on your next vacation in NYC. Also, they are relatively unknown to tourists (as in they are more “locals only” places), so you’ll beat the crowds.

Danny Meyer’s new restaurant Manhatta may have received mixed reviews, but no one can deny the views. The upscale French restaurant located on Liberty Street in the Financial District is on the 60th floor of a swank building. This makes Manhatta the *highest* restaurant in New York City. There is no other restaurant that rises in the clouds like Manhatta.

With a dinner menu that comprises butter poached lobster and crescent duck, you can expect to shill out a pretty penny, but perhaps the most memorable moment will be the views from floor-to-ceiling windows facing north and east (toward Brooklyn).

Opened July 2018, Manhatta makes the list of top new hot spots with incredible views because it is extremely rare for restaurants to have skyline views (Asiate at Mandarin Oriental New York at Columbus Circle has great views, but from the 35th floor).

Sister City opened *very* quietly on Bowery (and the website is intentionally basic), but it’s operated by Ace Hotels, a progressive hotel chain that doesn’t like to make a big splash, especially since the brand has a huge cult following. The hotel has 200 rooms, a ground-floor restaurant, Floret, and Last Light, a rooftop bar that is packed with stylish young people and has one of the best sunset views I’ve experienced in NYC, and of course, one of the best NYC skyline views.

Last Light at Sister City is right on Bowery, one of the most historic streets in New York City, so you have great aerial views in the surrounding area. While the indoor/outdoor bar has two rooftop decks, it is only on the 11th floor. However, it still manages to capture a mesmerizing cityscape (all the way up to the Empire State Building facing north, and all the way down to Tribeca facing South). That’s why I love it here. You’re not too far high in the sky, so you still feel the bustle, pace and energy of the city below, like you’re just hovering above it.

The vibe is young, millennial, artsy, indie, and you can count on craft cocktails and small bites… and, of course, DJs.

Hotel Indigo Lower East Side (the flagship for Intercontinental’s millennial-centric brand) bought the air rights at its prime location on Ludlow and Houston, so it’s the only hotel with unobstructed, 360-degree views in the area, starting from the 5th floor. The views are *insane*, especially if you’re staying on a high floor (the duplex penthouse has 360-degree views from floor to ceiling windows). You’re treated to views of downtown, midtown, uptown, Williamsburg Bridge.. the works. The city just surrounds you as an ultimate backdrop.

The 27-story hotel is mostly known for its indoor/outdoor rooftop bar, Mr. Purple, which is located on the 15th floor. You’ll find all sorts of tribes here. Young day traders, artists, locals, B/T crowd. It gets extremely crowded, and the bar seems to prefer bottle service over anything else. Because it gets crowded, you can expect to wait a while for a drink. However, it’s worth it, especially if you’re hanging out in one of the two outdoor terraces, where the views are just insane. One of the terraces has an outdoor pool, so you can bet it gets busy over the summer months.

The hotel opened in 2015, so it’s still relatively new, and hey. It’s one of the best NYC skyline views!

4. B. On Top, Meatpacking District

I wanted to add a little variety, so I’m recommending B. On Top. It’s on top of the Gansevoort Hotel in Meatpacking District, flaunting 360-degree views of the New York City and New Jersey skyline. From here, you can actually see the Empire State Building, One World Trade, Hudson River and Hudson Yards, the new neighborhood that’s been all the buzz in New York.

B. On Top is owned by Bagatelle Group, which is known for its party-inspired brunches (yes, think DJs and sparklers). The rooftop has indoor lounges and outdoor terraces (five separate spaces spanning 7,000 square feet), and serves up Mediterranean cuisine, craft cocktails and wine. It’s a great day spot for views, but obviously, the skyline lights up at night.

If you still want to visit one of the top three observation decks—Empire State Building, One World and Top of the Rock— this guide will help you decide.

Note: The entrance fee is around the same price ($35 per adult) at all three.

One World Observatory situated atop 1 World Trade Center, which is located downtown, rocks some killer, 360-degree views from floors 100 to 102. It’s not only the tallest of the three top observation decks, it’s the *tallest* building in NYC at 1,776 feet, and one of the tallest buildings in the world.

That’s awesome! But you have to wait up to an hour to get to the top, only to be jostling with hundreds of tourists hijacking your best Instagram moment when you’re there!

Also, it’s a bit removed from the center of the island. Midtown seems *so* far away, and the majority of the view is the Hudson River, which is beautiful nonetheless. An advantage of the view here is being super close to the Statue of Liberty (a prime view you will not get from Empire State Building).

Also, One World Observatory is *only* inside (there is no outside deck). The deck opened in May 2015, which makes it the newest observation deck in NYC until The Edge opens in March 2020, and easily is one of the best NYC skyline views.

An internationally known landmark, Empire State Building is a 102-story skyscraper in Midtown dating back to 1931.

The observation deck gets 3.5 million annual visitors alone. That’s 9,589 tourists a day when it’s broken down. JESUS! Do you really want to be herded up with these crowds? I think not. Honestly, views *of* the Empire State Building are impressive enough. If you do go, you can opt for a cheaper ticket on the 86th floor, or get the more prized view from the 102nd floor.

Top of the Rock

Top of the Rock was always the No. 2 to Empire State Building, mostly because the observation deck is considered relatively new (it opened in November 2005). What makes Top of the Rock unique is that it *has* views of the Empire State Building, so it’s probably better to go here because you can a healthy, beautiful view of the city’s coolest landmark.

Top of the Rock, which spans the 67th, 69th and 80th floor, receives more than 2 million annual visitors, according to The New York Times, just like Empire State Building, so you’re going to have the same crowds, the same lines and the same photobombs in every photo. Also, I should mention I worked at 30 Rockefeller for two years, and some times the line was so long and wrapped through the hallways, I couldn’t get to my favorite salad place!

What do you think are the best NYC skyline views? Let us know in the comments below!

6 things you should never do in Brooklyn

How To Get A First Class Upgrade On Your Next Flight