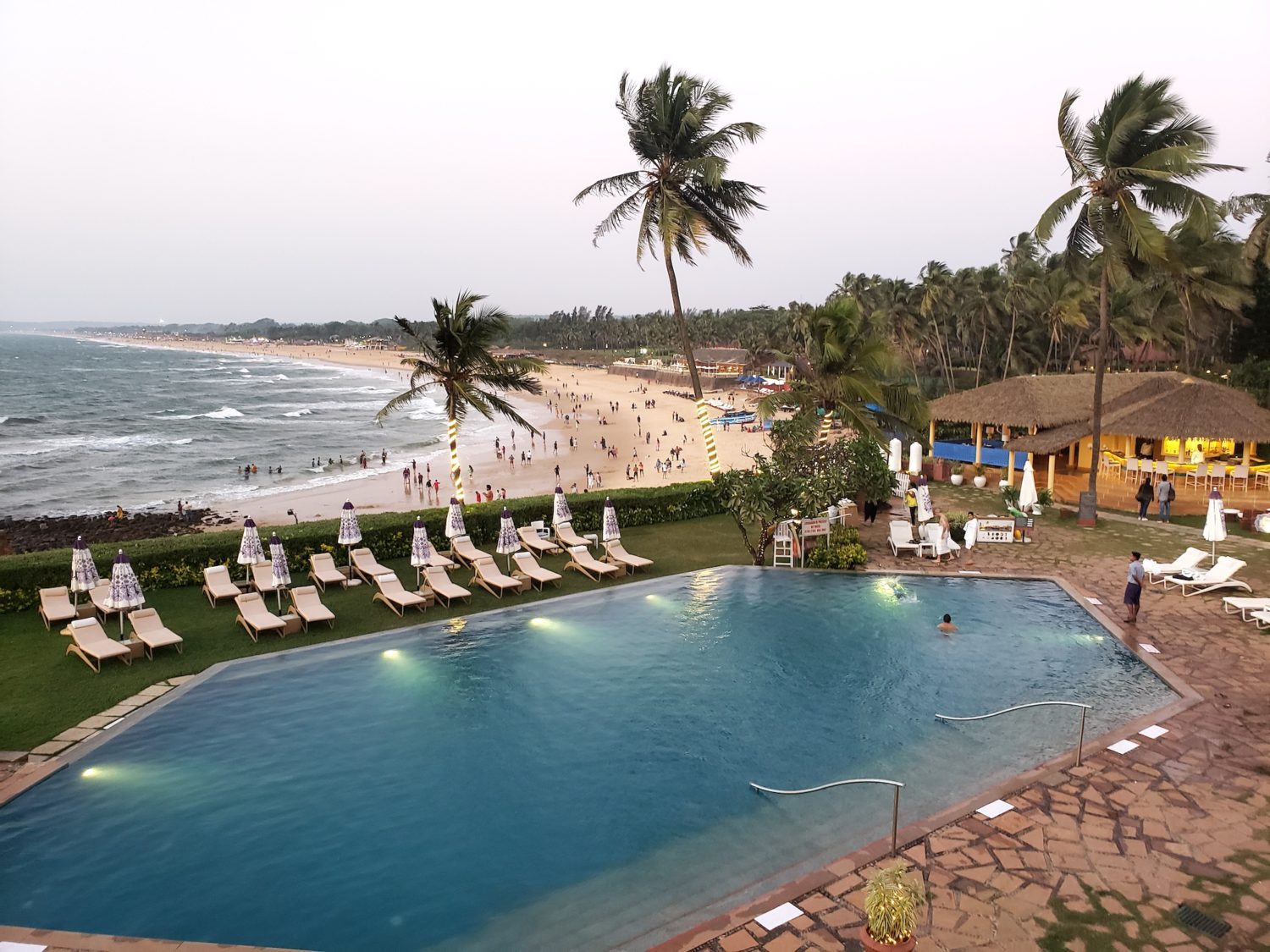 Every year, 2.5 million travelers (about 400,000 foreigners) visit Goa—India’s most famous beach destination. The dozens of sprawling beaches, string of after-hours venues and hippie-centric sub-culture are the biggest draw in Goa, seducing young travelers from all over the world.

But there’s more to Goa, India than beach vibes, including centuries-old attractions, museums and incredibly unique cuisine you’re hard-pressed to find in any other state of India. In fact, after returning to Goa after 10 years, I never once hit the beach and didn’t run out of things to do.

But plenty has changed. For the longest time, Goa was known for its spirituality-driven eden, where yogis and meditation practitioners sought a holistic, Tulum-esque getaway with a likeminded, free-spirited community. But like any destination that receives attention for its “Burning Man” allure and hedonistic, hippie aesthetic, the destination burst at the seams with commercialism, including river-boat casinos and name-brand hotels, as well as over tourism and tons of traffic on two-lane streets, despite a new bridge destined to help congestion.

In fact, in the past few years, Goa has been deemed “uncool,” whether it’s The New York Times writing that “the original countercultural community is now gone” or The Economic Times stating Goa is “losing its shine.” Even blogger Passport Symphony wrote that “Goa isn’t the backpacker’s paradise it used to be,” finding fault with the local government for the excessive construction and pollution and ‘kicking out the hippies.”

Perhaps this explains why the number of foreign tourists has significantly dropped.

So should you visit Goa?

Not if you’re looking for hippie culture. It still exists primarily with ex-pats, but the community is small and hard to find. Go to Goa if you want a cheap vacation, love Goan food and want to be impressed with the Portuguese influence.

Also, don’t go to Goa as a main destination, but spend a night or two there if you’re already going to be in India. Goa is more of a side-trip destination. You may want to spend little time at the beach and dive deeper into Goan culture, spread throughout the state, which is worth the visit.

Here are 8 surprising things you probably didn’t know about Goa, and hopefully this guide helps when planning a trip.

1. The best restaurants are not on the beach.

If you scroll through “best restaurants in Goa” lists by top outlets like Conde Nast Traveller and Vogue India, you’ll notice the majority of the restaurants are not on the beach—and with good reason. The beaches are packed with tourist traps, and many tourists simply want cheap, convenient eats. I’m not saying the beach restaurants are bad, they’re just not as elevated as restaurants you have to make an effort to get to, like Gunpowder, a Goan staple for foodies inside a Portuguese bungalow with award-winning dishes, and Spice Goa, known for spicy, fresh seafood.

I loved Nostalgia, a family-run boho-eclectic restaurant deep in the jungle. The kitschy, al-fresco restaurant has been around for decades, serving up Goan cuisine with a lot of meat-based and vegetarian dishes. It’s a funky and chilled-out space.

2. This incredible museum is an Airbnb.

It’s extremely uncommon for a museum to offer rooms to book, but Figueiredo Mansion is truly one of a kind. The mansion, built in 1540 and surrounded by coconut trees and paddy fields, pre-dates the Taj Mahal, according to the website, and it’s been in the same family for over 400 years.

As you wander the gorgeous interiors with antiques, you’re transported to another era. The mansion was completely private until 2010 when it opened as a museum. Now, you can rent one of 5 incredibly unique, palatial and private rooms on Airbnb for as little as $99 a night. It comes equipped with WIFI, an outdoor pool, and best of all, the bragging rights to live in an Indian mansion. It’s about an hour away from the beaches.

3. Taj Fort Aguada Resort is home to an important fort.

Taj Hotels, one of the most prestigious hotel chains in the world, has a gorgeous resort right on the end of Sinquerim Beach: Taj Fort Aguada Beach Resort & Spa, which is super old-school. It opened in 1974, and from my experience staying there, feels a little dated and retro, but that’s part of its charm. As soon as you enter, you have great views of the seascape, and many of the rooms have outdoor patios or open out to a sprawling lawn.

What I loved most about Taj Fort Aguada is that the resort is right in front of Fort Aguada, a 17th-century, Portuguese fort that’s one of the best landmarks in Goa. This historic fortress built in 1612 by the Portuguese is well preserved, and through a private entrance from the resort, you can walk onto the fort (which extends about 100 feet into the Arabian Sea) to take in history and also get sweeping views of the beach. Again, I need to stress how unique it is for a resort to be right on the foot of an ancient attraction.

4. Goan cuisine is spicy and unique with heavy Portuguese influence.

On my trip to Goa, I was a big fan of the cuisine, which is incredibly unique thanks to its Portuguese influence. You will rarely find Goan cuisine in other states of India, so you’ll want to come here for the cuisine.

There’s a lot of meat and seafood involved (especially since it’s right on the coast), and you’ll definitely get your carb fix on Poee bread, a staple bread in dishes (rather than naan), as well as smoked fish (like mackerel), chorizo, crab, coconut and tarts.

5. There’s a feni cellar in the middle of nowhere.

Cazulo Premium Feni Distillery is quite literally in the middle of nowhere, in the forest where spices and fruit and vegetables grow in the wild plantation. It’s random yet thrilling.

There’s a tasting room if you’re so inclined to visit, since the owner will ensure your visit is worth it. You’ll start by touring his plantation as adorable dogs trail you, where you can sample cashew (the main ingredient in feni), then tour the tasting room, where walls are lined with vintage, round glass bottles shipped to Goa from Portugal. You’ll do a feni tasting with foods like cheeses.

This may not come as a shocker, but massages in Goa are insanely cheap. You can expect to pay about $4 (300 rupees) for an hour massage on the beach. I went to Jiva Spa at Taj Fort Aguada, and a one-hour deep tissue massage set me back $48. This is expensive for Goa, but insanely cheap for a five-star resort, and it’s a lot less than what you’d pay for in the US, or other high-end resorts in India.

You’ll want to get a massage after a long flight from the US, so if there’s something you do every day in Goa, it should be getting a massage. It definitely won’t break the bank!

Some people may not realize Goa is a state, not a beach town. A beach town would be Tulum, which is compact, and its easy to get around. Another similar beach destination is Phuket, which is an island, so a lot bigger than Tulum.

Goa is a LOT bigger than both of these. It’s an entire state in India (sort of how Maharasha is an entire state, home to Bombay). The reason why this is crucial is because attractions and restaurants are staggered out throughout the state, and they take a long time to get to. Goa Airport is about an hour and a half from the main drag of beaches. My flight arrived after 2 am, and my departing flight was at 6 am, so I was fortunate enough to avoid the traffic, but each ride was already an hour long. Had I come in peak hours between 9 am and 9 pm, it would have taken me about an hour and a half each way.

Anywhere you go, you should allot at least an hour commute time (this is only if you’re leaving the beach area).

The Portuguese settled in this area in the 18th century, and most of the structures, including residential buildings, are built in the Portuguese style of architecture. You’ll see balconies and azuelas (Portuguese tiles), narrow alleyways and plenty of flowers. There’s also small bars, like Joseph Bar, which is akin to Lisbon, Portugal, where bars are tiny so people flood the streets. One of the biggest highlights that makes you feel you’re no longer in India is the brightly colored houses, along with the tiles, bricks, plaques and big doors.

In this quarter, there are dozens of art galleries, inns, cafes and bakeries and a church or two, like Chapel of St. Sebastian, built in 1818.

It’s a great stroll through history and commanding architecture.

Have you been to Goa? Let us know your thoughts below.

Why Reykjavik, Iceland Was Named The Least Stressful City In The World