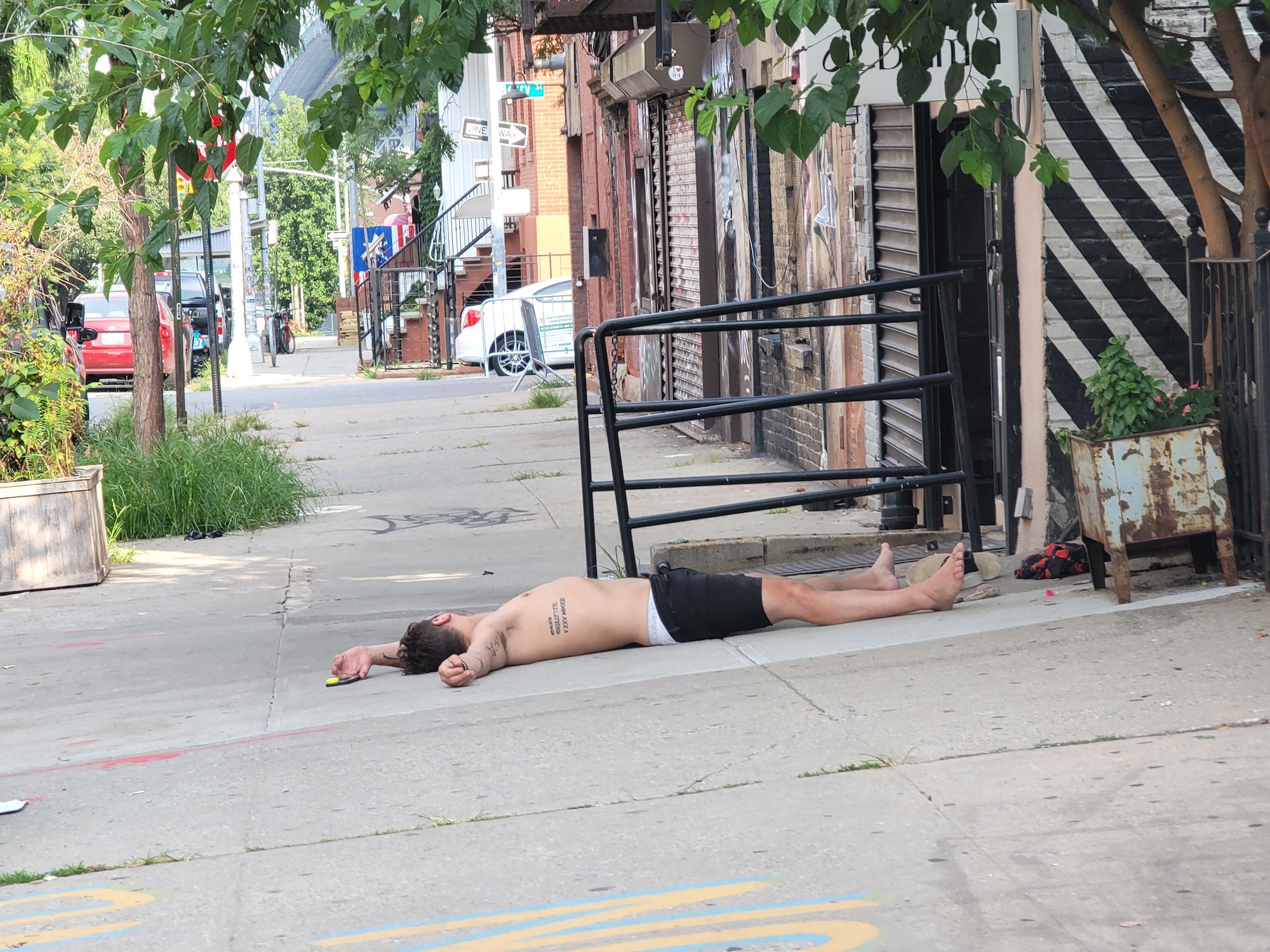 While NYC is starting to see tourism rise again, people are coming in droves, especially in Williamsburg, Brooklyn. Like this guy. Who loved Brooklyn so much, he celebrated hard and passed out on the street. Overnight. He’s safe. But let’s take a close look at a drunk millennial tourist passed out on a sidewalk in Brooklyn, NY, in case you need to know what not to do when visiting New York City.

On the way to the gym on a Saturday morning at 9 am in Williamsburg Brooklyn, I happened across this guy sleeping on the street. He was literally sprawled out, passed out, and unresponsive. I had tried to wake him up since it was like 80 degrees and hot, but he was truly out for the count.

When I got to the gym, I let the desk attendant know there was a guy passed out on the street out front. I said we should call 9-1-1. Not only was it super hot that day, and he could have been dehydrated, but it was unsafe. Anyone could have come up to him and messed with him or robbed him. He wasn’t homeless, and he wasn’t tucked away in some corner where no one could see him. The drunk millennial tourist was passed out on the sidewalk.

The ambulance and paramedics arrived on the scene. There was a whole slew of them. I watched from the second floor of the gym as they woke him up. I mean, it took a while. From what I could hear, he was still pretty drunk. He mentioned something about New Jersey, meaning he was a tourist. He also did not have a home.

The paramedics gave him water, and told him he needed to get up for his safety and tried to get him in the ambulance but he drunkenly refused. I also watched as he pretended to walk away, his cell phone to his ear. But, as you can see, he was alert, and walking (without his shoes on).

I was relieved and finished my work out. But when I left the gym, the guy was sleeping on the sidewalk again! He had moved just a few feet down, and he actually took off his shirt. I guess he was super comfortable. I know that I get annoyed if someone wakes me up from a nap. Anyway, you can see his cell phone by his hand, that anyone could have stolen, and again, it was super hot outside. So, I guess, the moral of the story: don’t get so drunk that you sleep on the sidewalk in suffering heat with all your stuff out to be stolen!

Don’t be like the drunk millennial tourist and book yourself a hotel. Honestly, super cheap hotel rates on Hotels.com! Travel shaming is on the rise

6 things you should never do in Brooklyn, New York

After 12 years in Manhattan, I moved to Brooklyn. Here’s why.