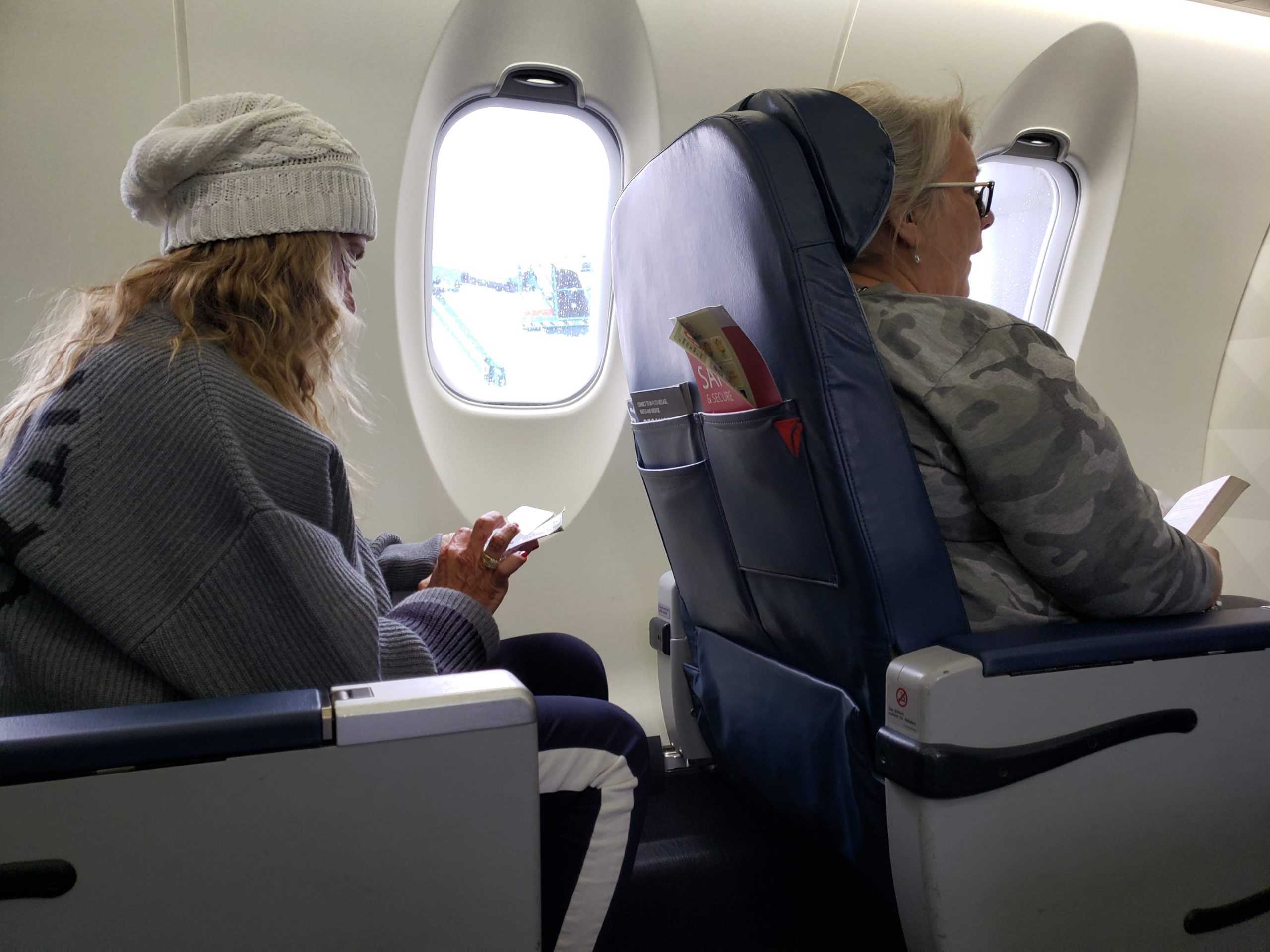 The absolute worst thing you can do on a flight? Not wear shoes. That, and not acknowledge the flight crew, according to Shawn Kathleen, a former flight attendant behind  Passenger Shaming Twitter account, is the worst. But let’s get real. passenger shaming is on the rise due to Americans just going batshit crazy for the smallest things (ahem… wearing masks), but it goes beyond that. For real. Way beyond.

Passenger shaming, in which airline passengers post photos or videos of inconsiderate, often absurd or simply tactless passengers on social media, has become rampantly lately. As you browse Facebook, Twitter, Instagram or Reddit, you may see the inevitable: A passenger with an emotional support donkey; a man watching NSWF content reflected through the window; a woman drying her underwear in the air vent; or racist passengers. Naturally, during Covid-19, passengers are getting insanely shamed for not wearing masks on flights.

You might also encounter viral videos picked up by news outlets, like drunk passengers fighting with flight attendants or normal passengers not wearing masks. Either way, passenger shaming is on the rise, and you can avoid being “that” person.

But hey, we don’t blame you if you act out.

There’s a lot of stress with flying, and passengers have a tendency to overreact, sometimes forgetting we live in an age of social media—and possibly regretting it later. In fact, Americans are already stressed out, and being in a contained environment with zero control doesn’t help. “A plane is an enormous pressure cooker of human frustration,” according to USA Today, which covered passenger shaming as far back as 2016. No one knows when the term “passenger shaming” was coined but the first mention was in 2013, a time when shaming in general was going viral.

So how can you avoid being a difficult passenger who might be kicked off a flight, banned from an airline, or worse, become instantly famous through a meme?

6 ways to avoid being passenger shamed!

1. Listen to and respect the flight crew.

We’re going with Kathleen for our number one tip. She says a passenger should acknowledge the crew and not blame them for mishaps beyond their control.

Always remember: The flight attendant’s main priority is to ensure passenger safety. They’re not out to get you. If your flight is delayed on the runway, has to turn around for inclement weather or runs out of apple juice, don’t direct your rage at them. In fact, as USA Today points out, take it out on the airline, not the flight crew.

I’ve taken hundreds of flights, and I can assure you, flight attendants are on your side. I’ve never had an instance where the flight attendant wanted to make my life miserable.

I’ve taken many flights in both business and coach, and flight attendants may feel a little more stern and stressed in coach because they have more passengers to attend to (a reason why service in first class is better, because the staff-to-guest ratio is much smaller). If you treat flight crew nicely in either class, they’ll remember you. If you treat them poorly… they will definitely remember you!

When you’re at a cruising altitude of 10,000 feet, there’s less oxygen levels in your blood, so you could feel the affects of alcohol sooner than when you’re on the ground.

So if you get a little rambunctious when you’re buzzed, you’re better off limiting your alcohol or just drinking water. We already know flights are stressful, and you could react in rash ways, so if you can’t handle your liquor, you shouldn’t be drinking.

If a flight attendant believes you’re in the “yellow zone” (impaired motor functions), they can cut you off. Rather than argue like many passengers who have become Internet stars, just smile and say thank you! Or pop an Ambien to avoid a disaster.

Listen. I get it. You want to be as comfortable as possible on a flight. It’s fine to take off your shoes if you’re wearing socks, especially if you have a long haul, but leave the socks on. Do not expose feet. Don’t you want to show off your fun socks anyway?

Do I really have to write this out? Yes. Too many photos of shamed barefoot passengers are going through my Instagram feed!

4. Stop arguing with everyone.

You should treat your fellow passengers with the same respect you want to receive. Even if you had a really bad day, you didn’t get your upgrade, you’re stuck in a middle seat or you can’t find overhead space for your luggage (which does suck), don’t take it out on those flying with you. Take a deep breath and visualize winning a million dollars or that amazing destination where you’ll soon land.

I know how easy it is to vent or rage or attack under stressful circumstances, but you could be rewarded by karma later by not putting anyone in an uncomfortable position — and you’ll dodge the passenger shame bullet.

5. Distract yourself to avoid passenger shaming.

If you are really, really, really super angry about something and need to take it out on someone, put on your headphones and crank Gwar instead. Or find an amazing show to binge watch, like one of these. Or plot out a bestselling novel.

Do everything you can to avoid confrontation because the chances of someone filming you will be very high. If it makes you feel better, send out a Tweet to the airline, just don’t go ape shit in real life.

Monkey see, monkey *don’t* do! If you get in the habit of seeing outrageous passenger behavior and think it’s ridiculous, you’ll likely avoid making the same mistake on your next flight. Also, Passenger Shaming is some guilty fun pleasure.

Thank you @TheEllenShow!! You made our day by featuring #PassengerShaming on today's show! 😘❤️ #crewlife #cabincrew pic.twitter.com/r0YOY4h5xm

Kathleen told Insider she started Passenger Shaming as a blog, and now the social media accounts with over 1 million followers feature photos of airline passengers behaving badly, rudely or simply showing shockingly unbelievable (and often uncomfortable) behavior. If you don’t believe me, check out her accounts, or even some good photos on Bored Panda.

Have you been a victim of passenger shaming? We’d love to hear your comments below.

The cheapest deals are on TripAdvisor