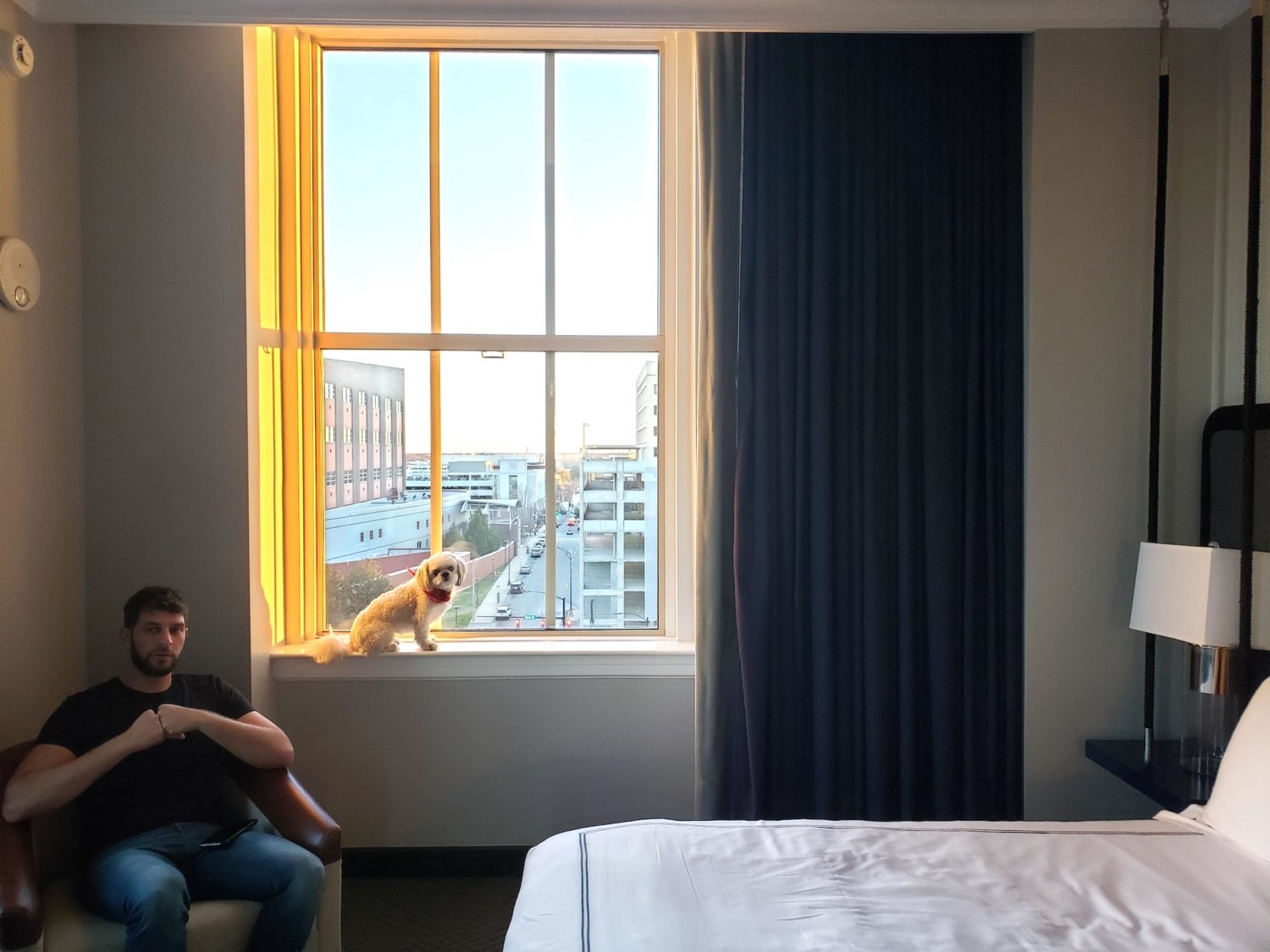 Winston-Salem, North Carolina, receives less than 2 million visitors a year, which is a shame, because more people should check into Kimpton The Cardinal Hotel. It’s amazing. I may go as far as to suggest it’s the best Kimpton in America. I’ve stayed in over 600 hotels, and I’m known for staying in more hotels than anyone on this planet, so I know hotels well. I’ve also stayed in over 40 Kimpton Hotels, and my Kimpton Cardinal review: It’s the best Kimpton hotel I’ve checked into.

Kimpton Cardinal Hotel is not new. It opened in 2016 in the very historic R.J. Reynolds building, a 21-story, Art Deco masterpiece that opened in 1929. History resonates here, and Kimpton helps preserve it. Honestly, you don’t feel like you’re stepping into a Kimpton. The building is old-world and dramatic, and there’s nothing modest about it. There are 174 guest rooms, including 15 suites, on the second through sixth floors, as well as a bar, French-inspired restaurant The Katharine and, seemingly randomly yet genuinely exciting, a recreation area that sprawls throughout the lower level. More on that later.

Kimpton is expanding in a way it has never before, opening in major international cities, but also opening (and renovating) in lesser known US cities, like Winston Salem. Since Intercontinental Hotels Group acquired Kimpton Hotels in 2015 for $430 million, Kimpton Hotels have been popping up all over the globe— and fast.

It feels like there’s a new Kimpton hotel opening every 7 minutes, and they will soon land in Atlanta, Bali, Key West and Tokyo this year. I even had the opportunity to check out the new Kimpton Hotel Arras in Asheville, North Carolina recently (which opened in October 2019). Bottom line: you’ll definitely know the Kimpton name soon if you haven’t before.

Take a look at my Kimpton Cardinal review, and why I consider it one of the best Kimpton in America.

The lobby of the Kimpton Cardinal Hotel is massive and gorgeous. Again, you don’t feel like you’re entering a boutique hotel. The high ceilings, the marble, the intricate ceiling design and the Art Deco touches are visually commanding, and you feel history right away. Here’s the elevator bank.

Here’s a view of the lobby from the check-in desk. Again, the Art Deco design features transport you to another era. I love how the natural light floods through the bar during the day. Also, if you haven’t noticed, Kimpton provides bikes!

Directly across the check-in desk is a super cozy lounge area that’s just as roomy as lounges in large chain hotels. You can truly unwind here with free coffee, tea and happy hour.  And, yep, we’re still in the lobby (it’s that big)!

You can see the French brasserie, The Katharine, is tucked away behind the bar. We had dinner here, and it was excellent. We did not feel like we were in North Carolina.

Here’s The Katharine Bar. We visited over the holidays, hence the green decor, but more importantly,  the retro, vintage furnishings and design pieces give the bar tons of character. I love the columns by the way.

I know I mentioned the natural light, but I’m a sucker for it.

The bar is beautifully handsome. It feels like it could be a set in a movie, or a storybook. What do you think?

We booked a one-bedroom King Suite, which is 650 square feet with a separate sitting area (standard rooms start at 300 square feet, which is still spacious). I loved the clean, modern design.

The bedroom came with an art-centric piece over the headboard, as well as a mirrored, sliding door to the bathroom. The bed super was super comfy with Frette linens, btw.

I loved the bathroom, which felt less like a traditional hotel and something more like a guesthouse with the hanging lamp and wallpaper (of cardinals).

The bathroom had a rain shower with separate tub, and one of my favorite features in a bathroom: a window! The view looks right out into the the R.J.R. Tobacco building, which you’re probably like whatever, but hey, it’s history.

Honestly, we spent so much time on this sofa from hours of walking around, it was probably our favorite piece of furniture. Both rooms came with TVs, by the way. Daniel and I like to unwind at the end of the day by binging Curb Your Enthusiasm, so if there was any gripe, it was that we couldn’t stream our devices to the TV. But hey, we went to bed early, which was probably for the best!

Another hotel feature that is incredibly thoughtful and visually commanding is the carpet in the hallway. You don’t see it until you approach the elevators. Also, note the paddles on the walls. Awesome.

Here’s another view of the French restaurant, The Katharine. All the Art Deco makes it truly stand out from the other restaurants in Winston Salem, and even other Kimptons.

I saved the best for last. Kimpton The Cardinal has a recreation area for guests on the lower level. It includes two bowling lanes, an indoor basketball court, a slide and tons more fun activities. Honestly, if there was a pool, I would have thought I was at a resort.

I’m not quite sure what the space was before, but I loved the exposed, industrial pipes and whatever this is. Oh, and a shuffle board.

Here’s the slide, the basketball court and a ping pong table.

There’s even a separate area where you can watch news or sports on flat-screen TVs. My Dad would love it here.

One of the benefits of the hotel is that it’s centrally located Downtown. You’re walking distance to every top attraction, including Mast General store, which is a huge draw for visitors and locals alike.

Here’s an old-school movie theater just blocks away from the hotel. Note: Winston Salem and the Cardinal Hotel are both super pet friendly.

You know I had to do a photo shoot with Ruby, but this brings up a good point. The sunsets from the guest rooms were insanely beautiful.

Have you stayed at Kimpton The Cardinal Hotel? Tell us your Kimpton Cardinal review below.

4 Iconic Hotels In Italy To Book This Winter