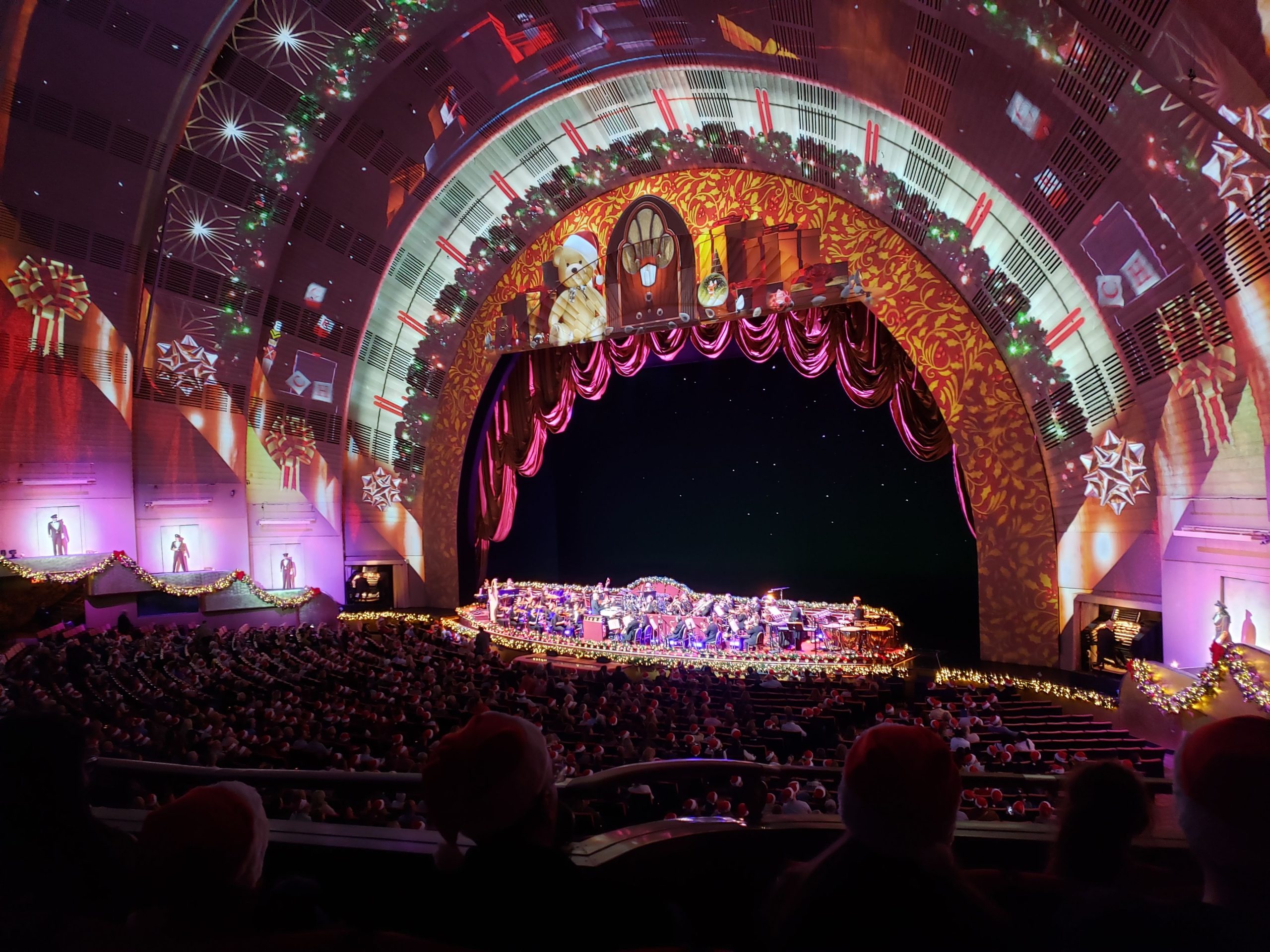 I’ve lived in NYC for 13 years, and I had never seen the Radio City Rockettes, so I decided to go with friends. The show we attended just happened to be opening night of the Rockettes “Christmas Spectacular.”

I was excited to return to Radio City Music Hall inside Rockefeller Center. I worked in an office literally across the street for two years, though I hadn’t been inside Radio City in almost a decade, so it was nice to return.

History resonates inside Radio City Music Hall, which features a gorgeous lobby with a beautiful, 35-foot Swarovski chandelier hung specifically for the holidays. It’s mesmerizing. We took several photos before being ushered inside the theater (we arrived just five minutes before showtime).

While I do enjoy the occasional Broadway musical, ballet or theater, I rarely experience them, so I want to clarify that my review below is from a spectator’s perspective rather than a critic.

History of the Rockettes

Though the Radio City Rockettes originated in 1925 in St. Louis, Missouri, the group started performing in NYC in 1932, the same year Radio City Music Hall opened. This is one of the reasons why the Rockettes are so special and closely tied with Radio City. They were among the first acts to grace this stage, and they’ve been part of Radio City’s heart and soul since it was founded. That’s almost a hundred years ago, which is crazy to think about, and it’s a natural indicator of how much people love the Rockettes.

Rockettes were originally called “Missouri Rockets” (glad the name changed, right?), and the formation of the Missouri Rockets was inspired by a British dance troupe, The Tiller Girls. Since the Rockettes were formed, more than 3,000 women have performed with the group.

I love history, so I spent time exploring The Rockettes through the decades. The group made their Macy’s Thanksgiving Day Parade debut in 1957, opened for Liberace at a Las Vegas Hilton in 1979 (they had a stint touring the country) and celebrated their 50th anniversary in 1982.

There are four sections at Radio City Music Hall: Orchestra, 1st Mezzanine, 2nd Mezzanine and 3rd mezzanine. I was in the 1st Mezzanine near the front. The section is relatively mid-range, so it had impressive views. In fact, there’s so much happening in the show (the performance took up a lot of space, not just the stage), so it was nice to have a high-point view and wide scope. Tickets to the show start at $49 in general, and my ticket for this section was $75.

At the beginning of the entire 1 and 1/2 hour show, I didn’t know what to expect really. I knew there’d be women with incredibly strong legs dancing in unison with famous leg kicks, but the show had to entertain with more than leg kicks for almost two hours, right?

I also didn’t know anyone who had seen The Rockettes, so I couldn’t quite find personal opinions of the show prior to attending. Ultimately, I was going into the show blindly.

As soon as the lights dimmed, the orchestra played. That was a show in itself. The orchestra truly set the tone with virtuoso and spirit, and  I could have listened to them for hours.

After the cheerful chorus that opened the show, the Rockettes (all 80 of them!) appeared in all their glory, taking to the stage with their famous tap, which echoed throughout the theater. You can literally hear every step since the heels of their shoes have little mics that help amplify the sound.

Since the Rockettes are truly iconic, it was an exciting moment. It’s the same feeling when I travel somewhere new after reading about it for years. You feel giddy and energized.

After the first ten minutes or so, I have to admit, I became a little… well, bored. There was a a lot of dancing and singing, but that was about it. I was starting to think maybe the entire performance would be, in fact, dancing and kicking and singing — but the acts changed quickly… and the pace picked up.

The “Christmas” part is spectacular

Santa came out in his sleigh, singing along with prancing reindeer, and I realized there would likely be many musical numbers. Huge relief.

Not much later, there was a 3-D animation (you receive 3-D glasses upon entrance) that virtually took up the entire theater. It was a nice little break. I imagine it was for the Rockettes to change into their next costumes since they were in different outfits for every act. In fact, according to the website, more than 1,1100 costumes are worn by the cast.

Dancers in bear costumes came out in choreographed song and dance, along with an adorable ballerina who took center stage. At this point, it seemed The Rockettes Christmas Spectacular was intended for families. I mean, there’s a singing Santa and dancing bears. It wasn’t exactly my cup of tea, but it was amusing, and I went along for the ride since I was already there and paid $75 for a ticket—but I knew I was getting my money’s worth when The Rockettes appeared as wooden toy soldiers in the following act.

I actually did an Instagram story during the wooden toy soldiers number, and I received several messages from followers who remember this particular scene from their childhood. The performance was witty, nostalgic and commanding. The way the Rockettes marched in perfect precision and unity to angular assembly is no easy feat, and of course, there was the iconic wooden soldier fall, which was incredibly impressive.

In the NYC Sightseeing Bus scene, cast members (dressed as New Yorkers) danced and sang in an act reminiscent of Newsies the musical. Naturally, the Rockettes also appeared with a precise, upbeat dance in and out of the bus (which rotated on the stage). This act was exciting and possibly the closest to “Broadway.”

Following that performance, what seemed like hundreds of Santas took center stage, many dancing and singing along the theater’s walls to their shadows (which were projections of other dancers).

The Santa number was more contemporary and even swayed hip hop, which was a nice break from jazz and ballet. In fact, this is what kept me compelled. Each performance became increasingly innovative and forward thinking, and they did things that were completely unexpected—but with perfection. The entire time I watched, I couldn’t help but think how many hours a day cast put in rehearsal time to come together in flawless unison.

The show ended with a tribute to the Christmas nativity scene with Mary and baby Jesus, where all the cast members seemed to be a part of. Oh, and speaking of unexpected moments, I was shooketh when I saw live animals, like camels, appear on stage during this final act.

Should you book The Rockette’s Christmas Spectacular?

So, in the end, was The Rockettes Christmas Spectacular at Radio City Music Hall worth it for someone who rarely goes to theater or Broadway?

It was a Friday night well spent, and I highly recommend it… even to New Yorkers who never go to Broadway shows like me. The Radio City Rockettes Christmas Spectacular was inventive, engaging, funny, charming, and the talent was beyond next level.

In fact, I wondered: how much are these girls making?? The skill, physical fitness, charisma and talent required is no joke, not to mention the other cast members were absolutely incredible (the young boy who didn’t believe in Santa Claus stole the show with his singing. It was a brief song, but it was truly infectious and joyful).

I also wondered how many hours a day the cast members practice and rehearse. Their performances were genuinely breathtaking, to the point I tried to picture their passion and commitment growing up, the hours they put in to make this show what it is today and the dedication (and privilege) it takes to be a Rockette.

Also, can we talk about all those elaborate costume changes?? They went through so many (remember, 1,100 costumes!), meaning they likely had to switch fast between acts. The costumes were elaborate, and they were amazing.

In the end, being part of the show, whether a cast member or audience member, is being part of history. The Rockettes at Radio City Music Hall has been entertaining people for almost a century now, and there’s a lot to be said about a performance that has stood the test of time. Even if you’re not a fan of Broadway or musical theater or ballet, you can find a lot to cheer about with The Rockettes Christmas Spectacular. And you get a Santa hat as a souvenir! What’s not to love?

If you’re going to buy tickets, you can click here.

What’s Next For Prince Harry and Meghan Markle’s Relationship?