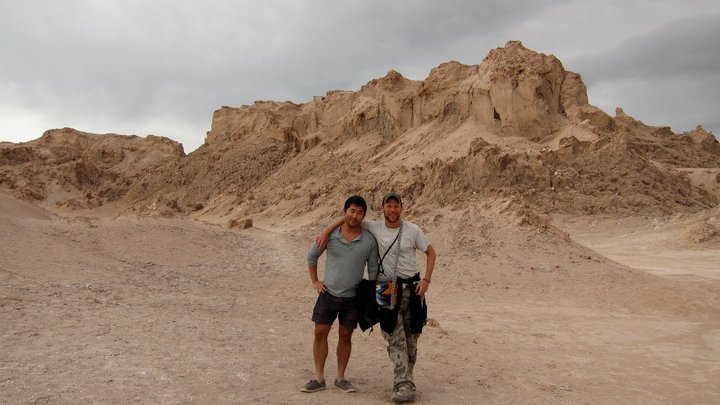 The bar is small, adobe-style, like a cave with clay walls, and a thin cocktail waitress who simply smiles when I tell her it’s my birthday (translation: no free pico sour). There’s a lack of action aside from the group of lively young Chileans behind us, beet red in their faces and ordering another round of beers. On a Friday night, around midnight, my friend Matt and I think this might be it, this is as good as it will get. After all, we’ve just arrived literally in the middle of San Pedro De Atacama (Atacama Desert travel), a few hours-flight outside of Santiago, Chile. It’s a far cry from Santiago’s musts—Carmenere wine bath at Ritz Carlton, shopping in Los Colates, bar hopping in Concepcion—fueled by outdoor enthusiasts who rise before dawn to take advantage of the day’s adventures and crash quite early at night if not admiring the stars.

But before we call it a night, one of the Chileans strikes up a conversation and soon enough, we find ourselves cramped in their pick-up truck with six other people, driving into a flat desert, the constellations in the night sky our only source of light. We end up at a desert party packed with locals, dancing to a live band that plays traditional numbers, drinking local beers about a buck a can, and surviving until 4 am when the band plays its last song.

You may have heard of the Atacama Desert from a friend of a friend who knows a backpacker that thrives on off the radar travel, small communities, no-frills bars, a penchant for nature and the thrill of exploring one of the most remote parts of the world.

While the Atacama Desert is about 35 million years old, the desert has been inhabited for millenniums, in and around the small village of San Pedro de Atacama, which only has a population of 2,000. However, the number of tourists rise every year. In fact, it’s a hot spot for intrepid travelers and bucketlisters who truly want to get away.

There’s one main street that floods with international visitors and locals who sell handicrafts and propose excursions from their agency. Due to Atacama’s high elevation (almost 8,000 feet), most travelers start their activities easy with the Cejar Lagoons, three lakes that are so richly concentrated in salt, your body naturally floats, akin to the Dead Sea in the Middle East. For the Atacama Desert, travel here for this alone. There’s also the salt flats in Soncor, which is made up entirely of salt, and the odd sighting of flamingos that live here is quite rare and as mystical as the destination.

We could stare at this landscape for ages!#Atacama #wanderlust #breathtaking pic.twitter.com/rlxPZXkCKq

The adventures, however, don’t truly begin until you don your best hiking boots and hit the valleys. Valley of the Moon actually has the landscape of the actual moon: rocky, desert-like red terrain and several canyons to hike through, exposing you to phenomenal views. It’s equally photogenic over at Death Valley, where a hike starts from the top of the canyons, which have been eroded by the wind, turning them into hot sand.

Sand surfing, anyone? Early birds will want to catch the tour up to the Tatio geysers, 13,000 feet high in the Andes, where a handful of geysers steam and create a natural, geothermal phenomenon. There’s even a hot spring where travelers take a quick dip for a relatively free spa treatment.

In town, there are more hostels than luxury hotels, but Noi Casa Atacama is almost a combination of both, thanks to its modern, effortless appeal to affluent travelers and young, friendly staff that keeps the resort lively, care-free and youthful. There are only 21 rooms, which makes it intimate, all surrounding a central pool and spa, with organic toiletries in the bathrooms and each equipped with a private veranda.

If you want to seriously remove yourself, check into Alto Atacama, a luxury resort just three miles from the town center and quite literally in the desert, flanked by two canyons. There’s no shortage of views (rooms one to ten face the Andes mountains), and no lack of activities.

The weather is getting hotter in the Southern hemisphere.#pooltime #chillout #relax pic.twitter.com/lqaiwlIIJK

The resort has only 31 rooms, three daily gourmet meals with ingredients plucked from their very own garden, six pools (yes, six) all within their own enclave, their own observation deck, a decadent spa and desert-swanky rooms that embrace the local culture and design.

But it’s the night sky that truly captures the allure of the Atacama Desert (travel here for this alone). One of the largest telescopes in the world is located here, and astronomers all over have appointed the location as having the clearest skies in the world.

The stars at night are vibrant and commanding and so vivid they appear within arm’s reach, and should you want to simply lay underneath a blanket of stars without the guide of a telescope, Alto Atacama is the only resort that truly offers this luxury. Stargazer or not, desert is the new beach, and the Atacama is already as hot as it will get.