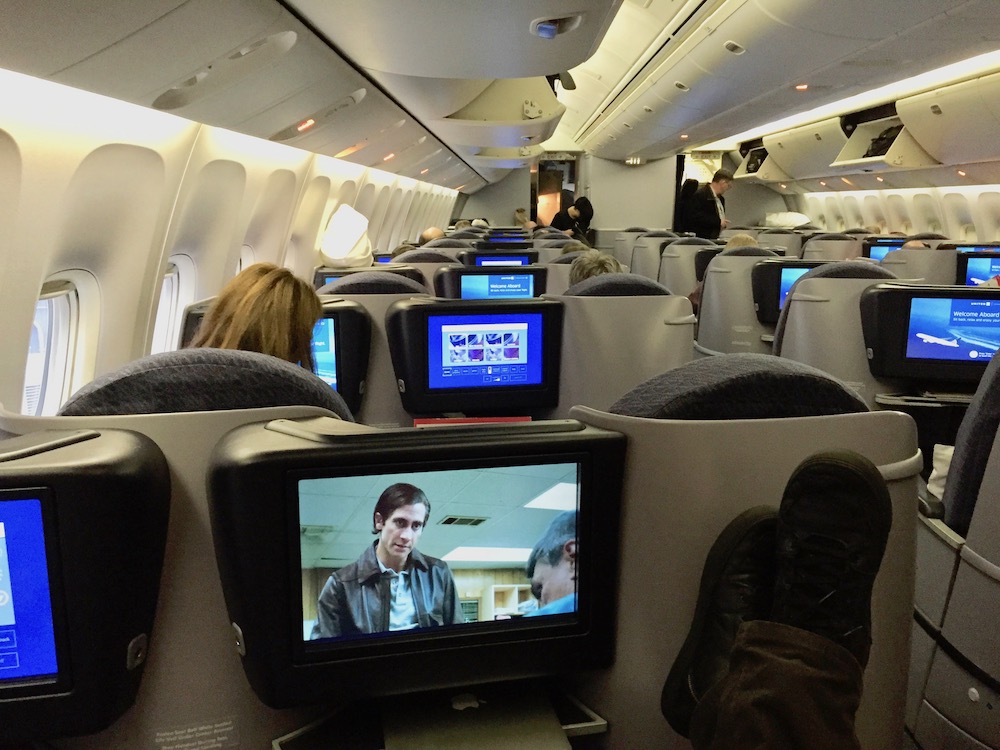 One of my favorite things to do on a plane is watch in-flight entertainment. In-flight movies are so convenient, right?

Well, watching in-flight movies on a plane was one of my favorite things back in the early 2010s, but now, I download and watch movies on my laptop. This way, I know I’ll actually see the movie *as it was intended* because airlines are editing the heck out of in-flight movies. If you’re watching a movie on seatback entertainment, you are not seeing the movie as it originally appeared in the theater, so you should probably never watch an in-flight movie.

But before we get to the scoop, did you know 10″ Fire tablets are only $149? Check them out (as well as other sizes) on Amazon.

Now, back to the scoop!

In-flight movies are heavily censored and edited in ridiculous ways

In October 2019, Olivia Wilde, director of Booksmart, went on a Twitter rant regarding her movie aboard a Delta flight. While she agreed to the Parental Advisory that preceded the movie, the comedy was still heavily edited, including muted or cut words (like “lesbian”), and entire scenes.

First of all, in order to select this movie from hundreds of options, you have to agree to a “parental advisory” that warns you that viewer discretion is advised. Once you click “proceed” it seems like you’ve agreed to watch the movie in its original form. Instead…

Another Delta passenger tweeted that almost any homosexual reference in the movie Rocketman was cut. Rocketman is a movie about Elton John, people.

On @Delta today discovered that #Rocketman is stripped of almost every gay reference or scene that @eltonofficial fought to keep in the film’s mainstream release, including a simple chaste kiss. This ⬇️ is good context but it’s still frustrating. https://t.co/4CY4Tl8PHh

Censoring movies on a flight is silly. The majority of passengers aboard are adults (18 and over), and they can make educated decisions on what movie to watch and what they’ll likely see in that movie. If they have children accompanying them on their flight, they are likely sitting next to them and can monitor their in-flight selections.

But airlines, like Delta, continue to censor, and it’s why you should never watch in-flight movies you really want to see at home or in the theater.

Tracey E. Gilchrist of The Advocate wrote a story in 2017 on how Delta censors gay kisses in in-flight entertainment, Bad Moms in particular. “Delta accused the studio of the anti-LGBT edits, and the studio called out the airline for running this particular edited version of the film,” wrote Gilchrist. “Both companies adamantly reaffirmed a commitment to depicting LGBT people with respect and equanimity, but that doesn’t change the fact that countless numbers of Delta customers watched a neutered version of Bad Moms.”

Apparently it was an oversight.

As for Booksmart and Rocketman?

Delta insisted they did not ask for any LGBTQ content to be removed, according to Inside Hook.

“Delta’s content parameters do not in any way ask for the removal of homosexual content from the film,” a statement reads as per Inside Hook. “We value diversity and inclusion as core to our culture and our mission and will review our processes to ensure edited video content doesn’t conflict with these values.”

Delta declared an editing company they work with controls the edits and censoring (though declined to mention which one, according to The Washington Post), and they did not reveal standards and guidelines for in-flight movies.

A number of companies provide in-flight entertainment to airlines, according to Inside Hook, and they work within their client’s editing parameters.

“Each airline will provide the distributors with their censorship guidelines and distributors will work with them on the edits — for example, nudity, implicit sex scenes, religious representations, plane crashes, competitor airlines’ logos, swear words and images or mention of pigs or pork for Muslim carriers are the general items that are edited,” Jovitah Toh, CEO of Hong Kong-based Encore Inflight Limited, said in an interview with The Points Guy. “We offer the airlines the choice of a theatrical/broadcast version or an inflight edited version.”

In-flight entertainment editing company Global Eagle Entertainment’s vice president of corporate communications, Mike Miller, told The Points Guy: “We dub and edit movies for global audiences, including children on board, and at the same time we are required to obey local laws and local religious sensitivities. That includes for sensitivities across Europe, the Americas, Asia, Middle East and Africa. Each airline has its own requests and we respect our customers’ wishes.”

It’s all so complicated, but the main takeaway… your in-flight movie will likely be edited. Even if it’s rated PG or says Parental Advisory before showing, it goes through an editing process. Many things from the original movie, even if it’s a dubbed word, can be edited, which will showcase a very different viewing experience. In a sense, you’re being robbed of the original cinematic art that was intended, which is why you should never watch an in-flight movie.

How to enjoy watching movies on a plane

You should not watch an in-flight movie, but if you want to see a movie on a plane, download it to your own personal device. Again, consider a tablet like Amazon Fire. I mean, everyone loves iPad but just look at the features. It’s pretty awesome.

You can also stream movies on many flights, which allows you to watch your own personal subscription services, like Netflix.

If you don’t have a laptop…. sleep. It’s perhaps the most logical thing to do. Not only are you powerless on a flight (you can’t go for a walk, call up a friend, order Postmates, etc), the high altitude, dry air and cabin pressure reduces your oxygen level, which makes you sleepy. Taking a nap is a great way to be refreshed when you arrive, and you can always watch the movie later!

We think you should never watch an in-flight movie you want to see at home in the theater. What are your thoughts? Let us know in comments below!