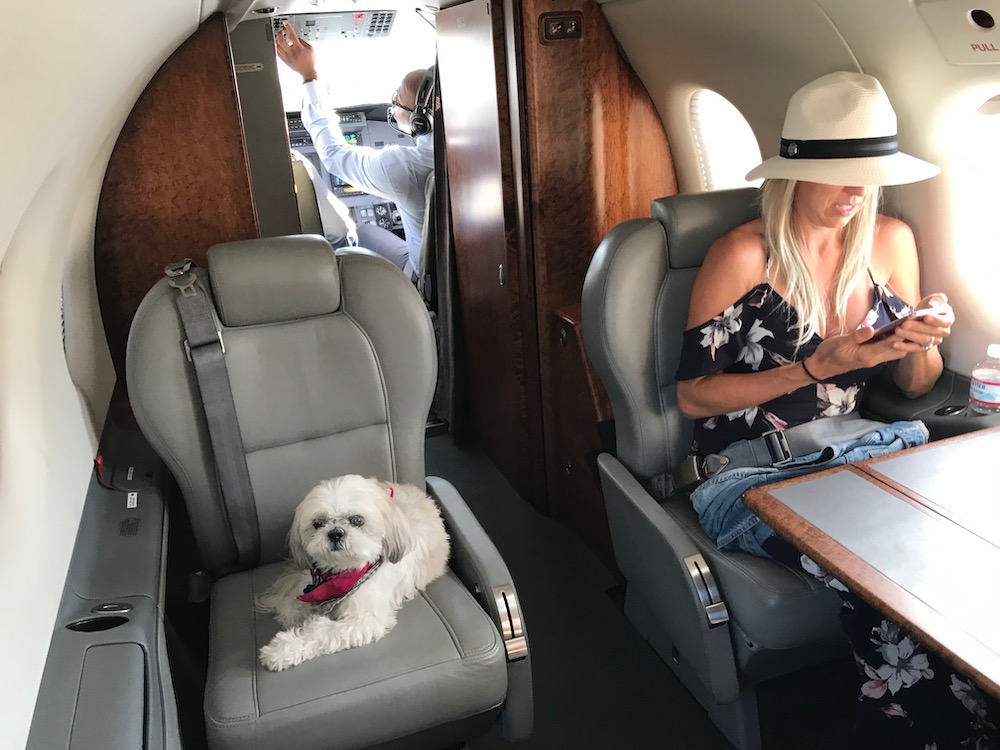 Pet travel is famously on the rise. According to Market Research, 32 percent of pet owners take their “furry friends” on a trip (two nights or more). That’s almost half of the 80 million American families who own pets. Fortunately, travel businesses are making it easier to bring Fido… and pets are loving it, including my dog Ruby, who I fly with at least 10 times a year. I’ve been doing it for almost a decade, and here are my 6 tips on flying with your dog.

My dog Ruby, a small, enthusiastic shihtzu, takes so many flights in a year, she could be Gold status with Delta SkyMiles. Luckily she’s acclimated well. Ruby has been flying as a pet since she was three weeks old, so she’s adjusted to high altitude, cabin pressure and *interesting* passengers. However, I’ve been on flights where other dogs are not in the same boat (uh… plane).

Trust me. I know flying with a pet can be challenging at first. Dogs like routine, they like familiar environments and they also want to use the bathroom mid-flight (or so it seems!).

As long as you allow your pet to feel safe and looked after, flying with him or her could be a breeze. To make your flight seamless for both you and your pet, take my six tips before you board!

6 EXPERT TIPS FOR FLYING WITH YOUR DOG

Even though many airlines let you book your pet online (like United and Southwest) and provide essential forms, I always call to speak to someone directly for peace of mind. It’s obviously not essential, and airlines are making it easier for you to keep all your bookings online, but I feel better speaking to someone.

BTW: This is my FAVORITE soft-sided TSA approved dog carry-on bag. I couldn’t believe Amazon actually A) made these B) made them well. Check it out on Amazon, where you can obviously see other doggy carry-ons.

If you’re traveling with a service animal or emotional support animal, there are different rules, and speaking with a human is often required, so just get in the habit of picking up the phone.

2. Have your dog use the bathroom before checking in.

The last thing I do before heading to the airport is take Ruby to “potty.” Not only is this relief for her, it’s peace of mind for me.

Even if your flight is very short, you have to remember time adds up. You have to consider the travel time to get to the airport, check-in and boarding could take up to an hour, waiting for luggage after the flight could take a while and the travel time from the airport to your hotel. That could be almost 3 hours of your dog still in his/her crate in addition to flying time. So, please remember to have your pup potty right before you leave for your flight!

One other thing to consider: you never know if an airport will have a pet relief area, and you don’t want to take the chance when you get there. It makes me feel so much better knowing Ruby won’t have to go for a while.

LAX has both an indoor and outdoor pet relief area. Huge perk but I still like to take her before arriving to the airport (to be safe).

3. Don’t give your dog salty treats on your flight.

Salty treats only make your dog thirsty on a flight. The more they eat, the more they’ll want water. The more water they drink, well… do the math. You don’t want your pup wanting to use the bathroom through the duration of your flight.

Ruby usually goes to sleep right after we board, so I don’t run into this situation, but it used to happen all the time. I would sit on the plane, and she would always need me for something, so I would giver her (salty) treats, then she would want water right after. Best is to give them dry, milk bone treats or something less salty.

I know someone who does this. It’s weird. Let’s talk about this dog, who has no idea he’s being snuck on a flight, yelled at for making noise, shoved hidden in some bag, literally submerged in total darkness on an entire flight to stay concealed. I mean, poor dog!

Play by the rules. You don’t want anything to happen to you and your dog, and if you get caught sneaking a dog on a plane, you could be kicked off the flight. Avoid sneaking your dog on a plane!

5. Let your dog know you’re there.

If it’s your pet’s first flight, and they are in their carrier under the seat in front of you, don’t hesitate to remind them you’re there. Pet them (yes, pet your pet), sing to them without looking crazy, do whatever you do to raise their level of comfort.

Dogs can be frightened being on a plane for the first time, so you have to be an authority and take command of the situation. Let your dog know how normal it is flying. Your pup will feel a lot better about flying!

6. Pet rules on a private jet are as chill as you’d expect.

Ruby’s taken a few private jets, and she loves it. The rules are so relaxed compared to commercial flights, and I basically get to hold her in my lap. She loved our last flight with Surf Air, and Surf Air LOVES on-board pets. They actually made this cute pet-friendly video for National Dog Day.

The pros and cons of traveling with your pet