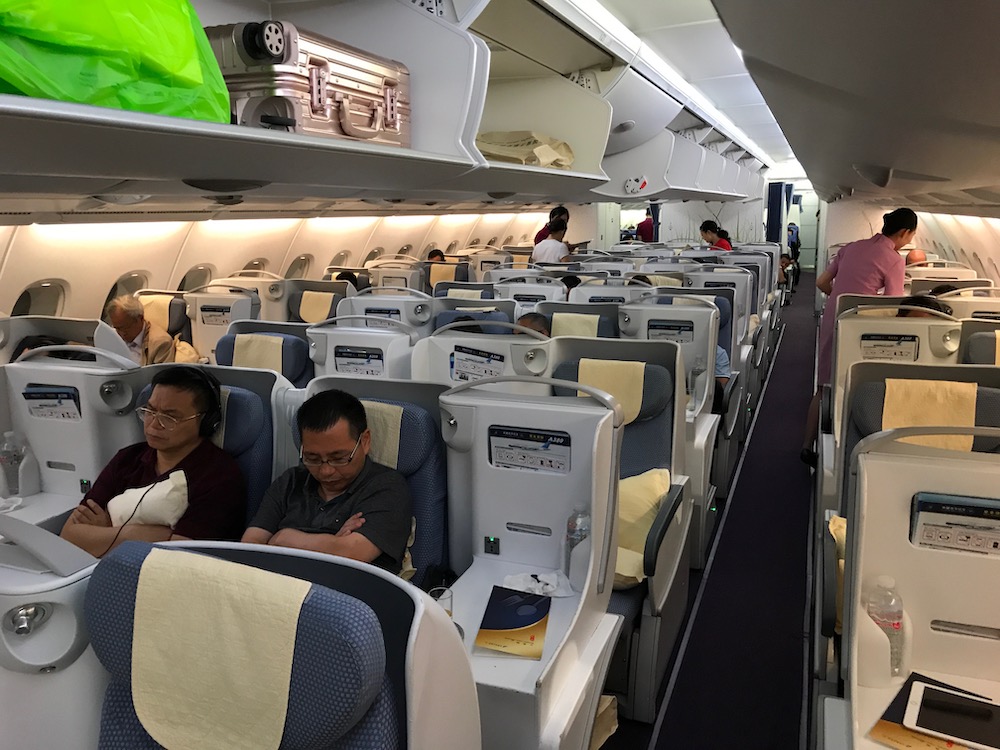 It can be awkward when someone asks you to switch seats on a plane. I should know. Out of the hundreds of flights I’ve taken, I’ve been in this situation dozens of times.

Here’s the scenario: A passenger will ask you to switch seats so they can sit next to their wife, girlfriend, husband, BFF, colleague, whoever.

It seems harmless… but does it give you a little anxiety? You’re put on the spot, having to think quickly for a response, and you want to say no but you don’t want to come across as rude, so you end up saying yes to avoid coming across as rude—but then your new seat seems worse. Weird, right? Because you did something nice?

The reality is that you chose your seat weeks before the flight. You should be comfortable in that seat and you don’t have to feel guilty giving it up. It’s *your* seat! You shouldn’t have to compromise your comfort for someone else. You don’t need to move your bag in the overhead bin, sacrifice your good seat for theirs or deal with any pressure to say yes, whatsoever.

In fact, I find it a little wrong for someone to ask you to leave your comfort zone and switch with them.

The couple asking you to switch seats on a plane failed to book seats together. That’s on them, not you. There is a 99.9 percent chance the airline did not separate them.

Another reason they could be asking you to switch seats is that they flew standby and got the last few seats remaining. They should be grateful they got seats, and not put anyone in an uncomfortable position to ask to switch. I think the only reason you should switch seats with someone is if someone is flying with a dog, and they are allergic, or if there is a really strong reason, like they have medical issues or somehow ended up sitting next to, like, Kevin Spacey.

Lastly, if you’re flying first class, a pair of passengers could have been upgraded to the last two seats remaining, so if they want to switch seats to sit together, they should be grateful they got the upgrade and just take the seats given to them. I have talked to many flight attendants who agree.

My recent scenario with a seat switcher: A man asked me to switch seats with his wife so he could sit with her. He was basically begging, and the flight was less than 3 hours. Eventually, I did switch only to be kind, but I sat up front next to a woman who kept sneezing and the food cart started from the back of first class, so I did not get my choice of dinner.

Also, I only take aisle seats, and his was window. I thought maybe I’d be rewarded with karma points at the least. Nope. I got sneezing woman.

I’ve gotten in the habit of saying no to passengers who like to seat switch. This is because I know the plane I’m going to fly in advance, I know the seat I want, I reserve the seat I want and I prefer not to have any changes. If someone asks me to switch seats, I say “Unfortunately not this time, maybe you can ask someone else.” Nobody is hurt in this situation.

Again, I will switch seats if I see the asking passenger truly has a situation (like a parent somehow separated from their kid, but again, they can pick their seats online in advance, so this is rare), but if it’s because they failed to book a seat they like, I have a standard answer.

I don’t want to sound evil, but I have been in so many situations where someone will ask me to switch seats so they get a better one, and I usually get a little anxious about it, so I’ve learned to say no.

Tell me your thoughts below!

One place you don’t have to worry about seat switchers: a private jet!